Missy and Kadin gave me a little Lego scientist figure.*  Her name is Dr. Bodin, which reminds me of the Bohdan automated weighing station I used to use.  She has brown hair, glasses, and is wearing a purple shirt underneath her labcoat, and is holding two flasks.  In short, she looks a lot like me except she actually is wearing a labcoat and is holding flasks rather than Schlenk tubes or sticking her arms in a glovebox...or at a desk writing proposals and advising students.  (Note to self: make a Lego glovebox sometime)  Note: I did not mention that Dr. Bodin is a woman.  This fact is not that unusual in the world of real life scientists, and it wasn't even all that noteworthy 25 years ago when I first stuck my arms in a glovebox.  However, it is extremely unusual in the sausage-fest world of Legos.  Dr. Bodin had her debut a few months ago, and it was noteworthy enough that I, a cranky old childless biddy, knew about it from both feminist websites, Facebook, and Chemical and Engineering News.  It is 2013.  There should've been lots of female Lego figurines doing lots of different occupations, about 30 years ago, or whenever they started selling all the custom Lego pieces.
Today when we were shopping Missy said she would've had trouble dealing with the princessy crap if she had a daughter rather than a son.  I agree 1000% on that sentiment, but the toys geared to boys are not free of gender stereotypes, and I told her so.  Perhaps I notice it a lot because I do not have kids and only get exposed to it a few times a year, or because I work in what is still a male-dominated field, even though women have been going to grad school in large numbers for at least 30 years.  I get cranky about the Lego sets with one or no female characters, and the fact that Dr Bodin is still newsworthy.  I get cranky that the token Lego woman in Kadin's new Lego set is a princess locked in the tower, and that when Kadin asked me to play Legos with him he assumed that I would want to be the princess and put up quite a fuss when I said I wanted to be the wizard instead, and gave the princess some agency other than just being rescued (more on that later).  I go "WTF?!?!?" when the practically all the cartoon characters in the They Might Be Giants kids science video are boys.  I raise my eyebrows at the few female Skylanders characters, who, although they are all badass honey badgers, are all small and cute, whereas all the male and theoretically gender neutral characters can be big or small, ugly or cute, and are always assumed to be male even when they are something like a robot. 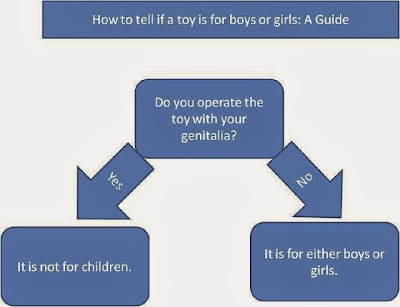 I know that toys are more gendered now so that retailers can sell more stuff, and kids love to self-identify with a group, whether it is by gender, interest, or whatever, and so naturally they want the stuff with the targeted marketing that they have been inundated with since birth.  I know that many people view it as mainly harmless.  I am not so sure.  To me, it's kind of akin to junk food versus somewhat healthy food.  Sure, kids are going to prefer the junk food but that doesn't mean they should get a steady diet of it all the time.  I don't think it should be forbidden, either, just get a balance.  Even if the majority of Lego players are boys, that doesn't mean that every single interesting character should be male.  Perhaps if they included some interesting ones more girls would be interested in Legos, or, barring that, Dr. Bodin would not make the news and I would not have to give Kadin lessons on feminism, which he shouldn't need in the first place because of the good example of his awesome mom.  I can give similar examples of girls' stuff that is equally cringeworthy.   Even if the majority of kids who play with a toy are one gender or another, I don't think the toys, especially the middle of the road ones like soccer balls, Legos, or animals, should be targeted they way they are.
Why do I care about this, you ask.  I don't have kids. It's the 21st century.  Women have made huge inroads in the workplace, even in the years since I started grad school.  Well, it all comes back to Dr. Bodin, the Lego princess, and 25 years of "2nd generation sexism" I've dealt with in the workplace.  This is the subtle kind that people deny still exists, but most women experience in the form of some blatant stuff and thousands of microagressions, which are like death by a thousand paper cuts, be they in the form of reduced pay and professional opportunities, a constant stress about one's weight and looks, the second shift of working full time and doing the majority of the housework/childcare, or in countless conservative politicians launching attacks on women's access to birth control and health care.  These things make me cranky, and I am worried that all the subtle influences kids are exposed to from birth will continue to set us back.*
Anyway, back to Dr. Bodin and the Lego princess.  When Kadin and I were playing with his Lego set, I was the princess and the evil wizard.  I forgot to include Dr. Bodin, unfortunately.  Kadin was the knight and various other characters.  The princess told the knight that she did not want to be rescued, that she was in grad school learning alchemy from the evil wizard.  It took a long time to convince the knight to go away.  I turned the narrative around a bit and was pleased with myself about that.  But, upon reflection later, it would've been even better if I had made Dr. Bodin the professor and the evil wizard a member of the princess's thesis committee.  Like everyone else in this country, even the cranky old feminist biddy is sexist at times, and it is humbling to realize that. So that is why we need more Dr. Bodins, so that 40 years from now, the women of Kadin's generation are not fighting the same microbattles that my generation naively assumed were history 25 years ago.

*  It's really quite astounding how much sexism persists in chemistry, even though things are a lot better than they were 20 years ago.  I've seen the female faculty candidates get subjected to much more critical assessments than the male ones, even though all of the obviously bad ones were male.  Over on ChemBark, which is a bit of a chemistry gossip blog, there was a post about who got hired for faculty positions last year.  That's not noteworthy in itself, but some of the comments degenerated to a discussion about various female faculty members and how they were so undeserving of the jobs they got, to the point where the commenter suggested that the faculty members got their jobs due to their parents' influence.  Seriously.  It was just ridiculous that the commenter had tracked down that information and actually believed it.  Fortunately, other commenters issued a pretty complete smackdown.