It is butt cold here.  Not as bad as in Minnesota or even Michigan, but still it's around 0F now.  My original plan to have a salad for dinner tonight just did not sound very good and I wanted something warm.
A few weeks ago I saw a recipe for purple rice topped with sweet and sour red cabbage  and tofu. Purple rice is sometimes called black rice, or, more poetically, forbidden rice.  It is black when it's dry but cooks up purple.   I was intrigued since I had some purple rice and liked all the other ingredients, so I made it tonight.
I'm feeling lazy and am not going to put the recipe here - go look at the recipe link if you're intrigued.  It was easy and looks quite beautiful and purple, and was very delicious.  In fact, it looks more purple than in the picture since I spread it out on a plate rather than cover up all that nice purple by putting it in a bowl. If you've ever had sweet and sour red cabbage (German style), just imagine it a bit crispier, with Asian flavors and not quite as sweet.   Molly the cat did not approve of this completely vegan dish - I think this was the first time I've even seen her refuse to clean my plate, although she did go after the tofu right out of the package.
For the science geeks out there, the color in the cabbage and rice is due to compounds called anthrocyanins.  They are highly colored compounds and the color varies from pink at low pH (acidic), purple at around neutral pH, and green under basic conditions.  My purple dinner didn't have that much vinegar in it - just one tbsp.  I played around with a little and added some vinegar to it.  The juice turned pink, although the cabbage and rice retained their purple color - a lot of the anthrocyanins were still trapped within the cell walls.

I bid adieu to Mr Cub tonight, via OKCupid email.  It wasn't going anywhere, so it was for the best.  For those of you who've talked to me or read the earlier posts, Mr Cub was my sexting buddy with whom I occasionally met in person.  We messed around a few times but did not have sex.   (He was very upfront about wanting to sext/Skype, etc, but was sort of weird about actual intercourse.) I hadn't heard from him in more than a week, and I had already decided it would be better if I cut things off.  He was entertaining and I liked him a lot but realized it wasn't working for me.  I would prefer to be in a relationship, but am not averse to having a friend with benefits on occasion.  I had thought that Mr Cub would be a good friend with benefits, but it did not work out that way.  My experience with him made me realize that it needs to either be with someone I already know, or someone who wants a casual friendship and not just pseudo-sex, or at the very least a player who is interested in sex and is up front about it.  Mr Cub was too complicated and too busy.
I am a little sad, but I am glad that I was a proactive honey badger about it rather than participate in a mutual fadeaway. 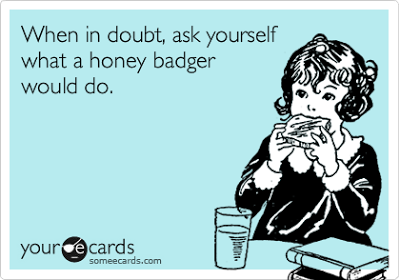 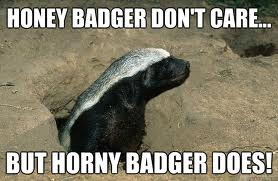 I was reading my LoseIt buddy Debi's blog recently (Hi Debi!) and she posted a recipe for a carrot and beet salad.  This sounded good since I had a bunch of rainbow beets and carrots languishing in the fridge.  Of course, I didn't have cilantro, ginger, or lime, or a food processor, so I took a lot of liberties with the recipe.  I decided to grate the beets and carrots, so that made me think of carrot and raisin salad, and to that I added some sesame oil to the dressing.  It came out well and is more interesting than my usual carrot and raisin salad.  It's a good thing I like it, because I have a ton of it.

Peel and grate carrots and beets.  Add raisins and mix.  Whisk together remaining ingredients and add to carrot/beet/raisin mixture and mix.  For best result, allow the flavors to mix for at least a half hour before serving.  I had stripy beets so it's not as red as if I had normal red ones. 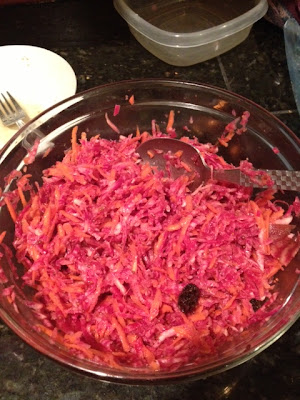 Molly and Luna have bonded a lot since Luna passed away.  Not that they weren't close before, but now they're total BFF's.  I'm not surprised by this, but am sort of surprised that the bigger and older Molly gets, the more Lucy loves her.  Usually adult cats are less patient once their kitten buddies grow up.  Lucy did the reverse.  They really started bonding once Molly was big enough to wrestle with Lucy, and now that Molly is bigger than Lucy it's just a total lovefest.  They wrestle, but the main goal seems to be to pin the other one down and lick their ears.  Sometimes they skip the wrestling and just groom each other.  It's cute, except when they wake me up in the middle of the night.
It is funny - between the two of them they have most of the traits and quirks of their predecessors, Luna and Rugrat, but it's not a straight Luna-to-Lucy and Rugrat-to-Molly distribution.  Lucy's my quirky one-person alpha cat, as Luna was, but she is also my little hyper cat, like Rugrat.  Molly's my sweet cuddly talkative Maine Coon, as Rugrat was, but she is also my mellow confident big cat, as Luna was.
Posted by Old Biddy at 1:54 PM No comments:

I have been the unofficial mashed potato maker for the last 35 years or so. Somehow my childhood fascination with the potato ricer ("it squirts out worms!") meant that it became my job, and if I didn't do it, no one else would.  I really like mashed potatoes, so as a result, I am pretty good at it.
While I was in CA over break I visited Judy.  She had an ultra-rich mashed potato recipe she wanted to try. I made the potatoes while she made the main course. For 5 lbs of potatoes, it had an 8 oz package of cream cheese, 2+ sticks of butter, and some half and half.  Yeah, that does sound good.  I made a half recipe.  It was quite tasty, but somehow it did not live up to the promise imparted by so much butter.  (Perhaps we did not add enough butter?  I didn't exactly follow the recipe, and added less butter than they called for, since we ran out, but it was still a lot and I added proportionately more cream cheese to make up for it.)  In fact, I realized I like my mashed potatoes better, even though they're practically diet food compared to that recipe.  Unfortunately, they're not really diet food so I don't make them for myself that often.
My recipe is neither CI-compliant (oh noez, I didn't roast the potatoes and then mash them!!!), nor over the top food-blogger compliant (what - only 3 tbsp of butter!?!? you didn't roast the garlic?), nor diet food blogger compliant (OMG - too many carbs!).  But it is easy and good, and you can feel good about not paying $8.49 a lb for pre-made mashed potatoes at Wegman's or Whole Foods.  However, if you are feeling lazy I will be happy to sell them to you at that price.
Anyway, my secrets are not so secret.  I cook the potatoes in broth, and then use mostly the brothy potato water when I am mashing them, rather than milk or cream.  I add some butter and milk or half and half, but not too much. I used to use more milk/cream/butter and less broth, but one time when I made them extra light I got lots of unanticipated compliments.  Lastly, I add peeled garlic cloves to boil with the potatoes and mash them right in.  If I'm bringing them for a Thanksgiving dinner I'll increase the amount of butter and use half and half, but even then they're not super rich.

Wash and peel potatoes.  Cut into chunks and add to soup pot.  Add broth, garlic cloves and enough water to cover potatoes.  Boil until potatoes are tender.  Scoop out potatoes and a bit of the liquid and mash -I use my stand mixer, but a ricer or potato masher is fine too.  Add butter, milk and enough potato broth to get them to your preferred texture.  I like them moist and fluffy so I add a lot.  Add salt and pepper to taste.   You can make them in advance and then reheat in the oven or microwave.

Am I in one of my clean out the cupboards/freezer phases?  Yes.  Did I have a massive butternut squash in the basement?  Yes.  Was it a snowy Sunday and thus the perfect time to make soup?  Yes.  I looked at a few recipes.  They all seemed to be too fussy or too caloric, but I did see a few that used a combination of ginger and coconut milk, which sounded good.  In the end I improvised my own and skipped all the fussy steps, as well as the ubiquitous onion.  I used light coconut milk so it's light but the coconut flavor comes through.  It came out pretty well, all things considered.  I ate it with steamed spinach and a turkey burger that was also part of the freezer cleanout.
Obviously, this is just a guideline.  If you have a smaller squash you might want to decrease the amount of liquids.
It's orange.  It looks like butternut squash soup.  I am not posting a picture.

1 large butternut squash (mine was 4 or 5 lbs.)
4 cups chicken broth (1 box) or water
1 can light coconut milk
3 tbsp ginger, peeled and chopped.
1 tbsp green curry paste (or improvise with other flavorings)
grated nutmeg (I would probably leave this out next time and use more curry paste)
salt and pepper

Peel and chop squash into 1" cubes.  Chop ginger.  In a large soup pot or Dutch oven, combine squash, broth, coconut milk, ginger, and curry paste and cook until squash is tender.  Carefully puree mixture and season to taste.  I didn't puree it too long so there were still some tiny little pieces of ginger which added zing to the soup.

makes a massive amount of soup - I am guessing 8-10 servings.