Classes start tomorrow. Being back at a university after a 13 year hiatus is a sometimes strange experience.  Sometimes I feel like I am the most ancient old biddy ever, and other times I am struck by how some stuff has not changed at all.  I'm not sure it makes me feel any younger, though.
On the way in to work this morning, the local college station played "Laid". It was not played as an oldie, but just as part of the mix.  Now, I don't remember exactly when it came out.  I think I was in grad school at the time, but maybe it was earlier.  In any case, it's older than the incoming freshmen.  Perhaps it was what was on the radio when they were conceived.  Later, I took a walk.  I was going to get ice cream, but resisted and walked a bit further instead.  They were selling posters in the quad.  The strange thing is that it was a very similar mix of posters as I remember.*  Those 'Abbey Road' Beatles posters were wayback retro 20 + years ago, kids.  You're not being a trendy hipster by getting one.  For all you know, your parents may have been conceived to that very album. 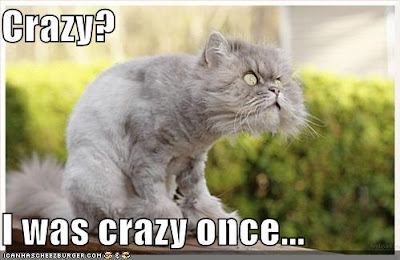 *perhaps no one ever buys them and they're the same ones I saw when I was in school.
Posted by Old Biddy at 6:17 PM No comments:

I paid it forward a bit and gave my old Weber charcoal grill to a grad student rather than trying to get $30 for it on Craigslist.  She and her roommate had just moved to a new apartment which has a porch where they can grill.  She said they've used it almost every night. I am pleased that it is getting used rather than gathering dust and spiders in my garage.
Posted by Old Biddy at 8:26 PM No comments:

This is my brain, on chemistry

Sometimes I think my brain is going to explode.  I reached the point where it got completely filled up a few years ago, and since then I have been forgetting stuff in order to make room for new information.  My few months of unemployment probably cleared up some room in there, but it's gotten filled up again.
What I would really like is to be able to systematically clear out whole sections of memory and then defragment my brain like I do with my hard drive..  It would be great to clear out the song lyrics section, for instance, and have more space for chemistry. Or maybe get rid of the plotlines from every single Sex and the City episode so that I can remember more random stuff about my new hometown.
When I started back to work, I felt like my brain was rusty.  This is hardly surprising, since I had been unemployed for a few months and before that was working in an area different than my main field of expertise.  Chemistry brain was still there, but it took organometallic brain a bit longer to come out and play.  Now organometallic brain is fully functioning, but I notice that organic brain is not functioning as fast as I want it to.  The only problem is that it's not a matter of remembering what I used to know and then getting caught up in the literature.  Nope, there's a lot of stuff I actually need to learn.*  This is why I need more space in my brain.

Getting my rocks off

My landscaper called the other day.  He wanted to see if it was ok if he took one of the big rocks in my yard for a project he's doing at home.*   It matches one he already has.  He offered to do me a favor in return, and suggested that he take away the nasty shredded sandbags/sand.  In the alternate universe where I am both bold about propositioning guys and quick with the witty repartee, I would have suggested that he help me get my rocks off in return.  In the real universe, it was dinner time and I was hungry so I said ok, no problem.

*  I don't know if this is really for his yard, or if it's actually for one of his paid jobs and he just said that to make me more likely to let him take the rock.  I didn't want that one, so it didn't matter.
Posted by Old Biddy at 9:02 PM No comments:

Yes, it's true, I finally posted a profile to Match.com.  With pictures and everything.  I even paid money. If you're nosy, you can go look me up, suggest guys for me, and give me helpful pointers about how not to scare teh menz.  (My username is forestcat14850.)  I'm even writing back to the guys that email me and winking at others.  For those of you who haven't been doing online dating recently, a wink is sort of like a poke, only you can't make as many crude jokes about winking as you can about poking someone.*  There are also lots of new cyberstalky features like seeing who's viewed you, etc.  I'm putting my finely tuned cyberstalking skills to good use.
There are a frightening number of guys who's username are "T_lastname"  Aaagh.  As a matter of principle I'm not responding to any of them.
Anyway, there's not much to report now, but I'll be sure to give the full report if anything entertaining happens.

I have a Mac now.  It's nice.  There are some things I like better than on my PC.  However, it's not a unanimous decision.  Going from PC to Mac is just as painful as going from Mac to PC. It's not just the computer, it's all the slight differences in the programs I use. I notice very few differences if I'm just surfing the net, but a lot when I'm actually trying to work.
Posted by Old Biddy at 5:40 PM No comments:

Today I bought a brand new grill from a very nice couple.  They had won it in a raffle but it was too big for them, so they'd never even used it.  It was half price, and they even delivered it and gave me the cover for it and some veggies from their garden.  I scored big time, since I was all set to order this exact grill or its smaller brother from home depot. The only reason I didn't was that I was indecisive about which one I was going to buy.
I must've invoked some serious Craigslist good karma when I took the French woman's rug back to her.  Anyway, now I'm done with all my big household purchases.  It's a relief.  I hadn't even considered a grill to be a high priority item, but I found that I really missed having one.
More grilling details will be posted over Recipe Geek.
Posted by Old Biddy at 4:55 PM No comments:

Two months ago today, I left California with my mom and my cats.  It feels lie just yesterday, and yet it feels like a whole lifetime ago.
I like it here.  I like my job, my boss/the group, Ithaca, and my house.  I do need to meet more people outside of work and my neighborhood.  Once in a while I still get mopey about T, but it's not all that often and I can push it to the background when I need to, or go with the flow and ride it out, and it doesn't last long.
Posted by Old Biddy at 8:57 PM No comments: