OKCupid "What not to do" of the week

A few days ago some guy looked at my profile on OKCupid but did not send me a message.  So of course I looked at his profile, decided "Meh", figured he was also "Meh" about me since he didn't send me a message, and forgot about it.  The next day he sent me the following email.

Would you give it one more chance ? I may be 'The One'. Please read my profile. I hope you find whomever you are looking for .

Um, ok, dude....I don't seem to recall him sending me an email before that.  What is this one more chance business and who sent the memo that it is ok to not send me a message and then get butthurt that I don't send one?  If I were on the fence this would definitely make me not be into him.

I went in for my annual physical the other day.  Because my former physician has moved on, I have a new one.  She is a 60-something, slightly crunchy granola/stereotypical Ithacan.  Anyway, I mentioned that my knees have been achy for no apparent reason.*  She instantly suggested I try going gluten free for a few months.
I'm dubious, but will try it. I know that I felt pretty good when I was rigorously following a low glycemic, Zone-type diet, which is fairly low gluten.  Although I'm not rigorously following the Zone nowadays, I've kept some of the habits I developed, so  I don't eat a whole ton of gluten - maybe equivalent to two slices of bread per day or less.  Nonetheless, I do like baked goods.  This is going to be tough - not as tough as giving up dairy would be, but still tough.
I'll give it a shot for three months, as suggested.  I'm not going to get my panties in a bunch about homeopathic levels of gluten, but will cut out wheat/barley and see what happens.  Sometimes all the dietary advice I get contradicts itself.  Soy and cruciferous veggies are good, except if you have a thyroid condition and then they're bad.  Low fat or low carb?  Is coffee good or bad?  Is dairy good or bad?  What about artificial sweeteners?  Inquiring minds want to know.  It's frustrating.  I'm normally a fan of moderation and common sense, so this is something different for me.

* Some other causes might include my knees getting tweaked from the appx 30 flights of stairs I climb every day, or the two cats who sleep on my legs every night, me wearing unsupportive snow boot too much, or my thyroid med prescription being too low. 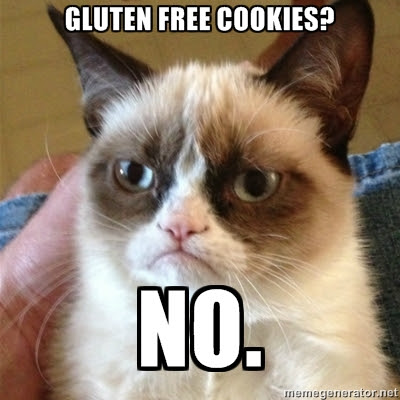 By this point I should know better than to write back to anyone who messages me on OKCupid whom I'm not interested in, but no...There is a part of me who never learns.  Anyway, Mr FullofHimself wrote me.  He's in an open marriage.  Here's part of his message.

I just switched my billing from "married" to "available" tonight. Something's changed in my open marriage in the last couple of weeks. I don't think we're headed for splitsville, but let's just say it's become even clearer to me that the marriage isn't and shouldn't be my only avenue for love. What I have to offer may be somewhat low in quantity but very high in quality. You say you're looking for someone single so this talk may be a turnoff. But if you don't mind me being blunt, do you want to trade e-mails so I can send you a picture?


I know you'll find this hard to believe, but sometimes I'm just too nice for my own good, so I sent him a fairly polite brushoff letter instead of just ignoring him. I added the booty call part since pretty much everything about his profile and message screamed booty call and mid-life crisis.


Anyway, thanks for your honesty. You seem like a cool guy. However, I'm looking for a relationship, preferably long term. I'm not averse to having a friends with benefits situation in the meantime, but I have recently come to the conclusion that if I do that it should be with someone who actually wants to be friends, not just a booty call. I prefer not to go after married guys, even those in open marriages.
Best of luck with everything.
Old Biddy

Mr FoH wrote back promptly to tell me I'm a rude prude, or perhaps a rude slut.  I'm not really sure which.  Perhaps both. Apparently I offended his sensitive new age male sensibilities.  Or perhaps he is this rude to everyone who tells him "no thanks" due to the fact that he is married.

Thanks for your reply. You misinterpret me severely if you describe me as aspiring to a mere "booty call." That phrase bothers me, especially if you're distinguishing it somehow from something you call "friends with benefits." One advantage of a situation such as mine is that this love and relationship terminology, or philosophy, can be much more fluid. I actually am finding my heart has more, not less, love available to share now that my marriage is open. I found this marvelous list in the book Opening Up, by Tristan Taormino. She says intimate relationships

Now I grant you it's amazing, and lucky, to find all those wonderful things with one other person: that's the monogamous holy grail. And the monogamous point of view also implies, don't you go looking for any of those goodies with anybody else. But as I look at that list, my feeling is that you only need any one or two of those items with any one person for that relationship to be rich and worthwhile, on either a short- or long-term basis.

Of course, none of this talk makes me any less wed, so perhaps it's fruitless. And I'm sure you didn't mean any insult, but perhaps you'll accept a gentle observation that your communication could show more grace. I'll be glad to discuss further if you're so inclined:

Seriously, WTF?!?  You want graceless - I'll give you graceless.... He unleashed some major "negging" on me for my sugar-coated and relatively inoffensive email.  Let me call the wahmbulence for the married guy who gets offended that I implied he was looking for a booty call.  What, do I hear the sound of the nanoviolins playing?!?!? The male privilege, it astounds me, even as an old biddy who is pretty cynical already. Don't get me wrong - I'm not going to go after married guys, but if I were I'd definitely prefer the simple booty call ones to the ones who are so self-righteously full of themselves.
I was very tempted to write back and rip him a new asshole, but I know that would be just feeding the troll.  So instead I blogged about it here.  The one good thing about all this is that if it keeps up like this I'm going to look forward to being a crazy old cat lady. 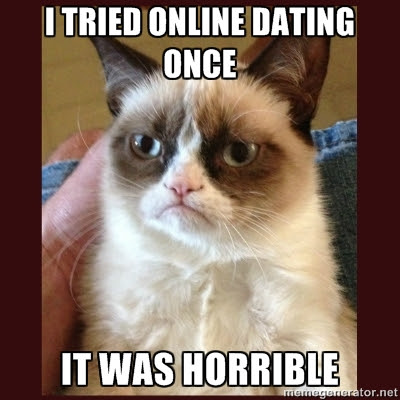 My iPhone is ruining my sex life, or, the strange tale of Mr. Bear

While I was still hot in the throes of my sexting and occasional in-person messing around phase with Mr. Cub, Mr. Bear contacted me on OkCupid.  Mr Bear is in his 50's and divorced.  I was kind of aloof since he seemed like a player and lived in the Syracuse area, but nonetheless we ended up eventually switching from OKCupid emails to texting.  He was witty and entertaining and I had nothing else on the horizon so the texting continued.  He tended to be a bit too suggestive, considering that we hadn't met.  I like a bit of joking innuendo but nothing more until I have met the person behind the texts, so I would deflect it back to the stage that I was comfortable with.  He asked me to dinner but then bailed, claiming something had come up with one of his kids.  I thought that was the unofficial brushoff and decided not to go out of my way to pursue him, but he continued to text frequently and occasionally be suggestive.  He asked me if I wanted to get together this Sunday.  I agreed.  Today he texted me that he had met someone that he would like to try being exclusive with, which is fine.  I know these things happen and I can't even claim my pride is injured since we never met in person.  Nonetheless I am cranky about dealing with so many losers and weirdos these days. Seriously, I don't care if I was the backup plan or not but it's not like I was initiating any of the texting or sexting.  WTF was he doing continuing to try to get me to sext with him all the way up to yesterday?!?  Ugh.
I like to text, and once I've met someone I also like to sext, but I am seriously thinking about instituting a no texting policy until I've met someone in person.