I've been slacking off in being a #ladyscientist.  I've been too busy writing proposals, teaching my summer undergrad, going to NERM, and watching the Womens' World Cup to be #distractinglysexy  in at least two weeks.  LOLno.  But those are the reasons I haven't blogged about Tim Hunt's incredibly dumbass comments.  In the meantime, others have done an admirable job blogging and tweeting about it.  So my blog post will actually be about a discussion that was prompted by it.
NERM was in Ithaca this week.  For those of you who aren't chemists, it's the Northeast Regional Meeting of the American Chemical Society.  Anyway, I had dinner with two MIT classmates - S, who worked with me when she was an undergrad and I was a grad student, and AV, who is also an inorganic chemist but worked for a different advisor as S and I.  Both AV and S are professors now.  We were discussing the Tim Hunt comments, and our own experiences, and ended up reflecting on our time at MIT.
I had a very good experience in grad school at MIT, and did not notice any sexism until I started interviewing for faculty positions.  I have since wondered if I was just clueless and didn't notice the more subtle stuff, but I sure as heck started noticing stuff once I left MIT.  I mentioned this to S and AV, and they said they noticed the same thing.  AV thought it was because it was totally normal there for genius to occur in unexpected, nonstereotypical packages.  My theory was similar to AV's - we were all expected to be competitive; getting results in the lab mattered a lot of more than anything else.  No one cared if we were ladylike or not.  I was able to be a total fucking honey badger.  S said she got the impression that inorganic chemists noticed gender less than organic chemists, and encountered more bad experiences when she went off to grad school and postdoc than she had experienced at MIT.  It probably also helped that this was in the early days of the internet, so we were sheltered from hearing about incidents at other schools or idiot comments from dinosaurs.

I'm on a roll, and I'm procrastinating on some research proposals, so here's the "Fuck You!" of the day.
Disney took a break from raking in money and selling annoyingly sexist toys to kids and just laid off a bunch of programmers and replaced them with H1B employees from an Indian outsourcing company.  Yeah.  I'm not anti-immigration, or even anti-H1B.  I think it's a great way to hire highly specialized science and tech folks, many of whom are educated here in the states and have PhDs.  It's not supposed to be a way for Disney to get rid of a department and bring in a whole new cadre of programmers who do the same thing but cost slightly less.
While Disney was doing that, several of my students were unable to get H1B visas since the outsourcing companies had taken most of the slots for the year.  So fuck you, Disney!  If I weren't boycotting you already I'd start now.
Posted by Old Biddy at 5:11 PM No comments:

I don't know what got into Molly and Lucy.  They are normally BFF's and are totally inseparable.  In winter they snuggle up together and when it's warmer they just sleep far enough away from each other to keep cool.  But something happened on Sunday night and I have no clue what started it.  Now it's like I have two former BFF junior high school mean girls and lots of drama.
Molly was outside most of Sunday.  I was sort of worried since it was actually cold, rainy and windy, and I had heard coyotes nearby recently. When she did come in she was kind of bedraggled and nervous.  She made her way over to the kitchen and Lucy ran over to greet her.  Molly was sort of nervous and not her usual self.  I looked away and the next thing I knew they were violently fighting.  We got them separated, but I wasn't able to catch Lucy and put her in another room. When Molly came out Lucy chased her upstairs and cornered her under the bed.  Molly was completely freaked out.  I kept them separated that night, and the last two days.
Molly has been less spooked each day, and is starting to seem normal except for her interactions with Lucy.  That is getting better, but more slowly.  Lucy misses Molly, and cries outside the door of Molly's room.  She seems hurt and worried when Molly growls at her, but she chased Molly under the couch tonight.  Fortunately, Molly was calm once Lucy had gone back outside.  The next time I looked over, Lucy was on the outside and Molly was on the inside, and Lucy had brought Molly a dead chipmunk. 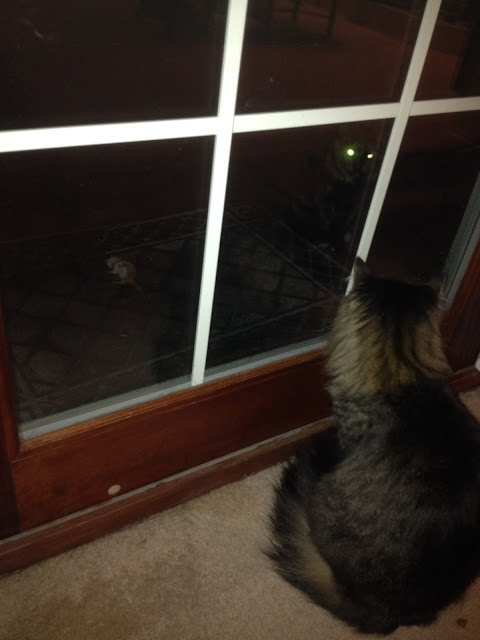