The #MeToo hastag/post is circulating on the interwebs now to show how common sexual assault and harrassment is.  I haven't posted yet, mostly due to my own baggage, and also because I've been very lucky and have not experienced anything serious or particularly traumatic, and don't want clueless people to ask me about it and say "Oh, that's not so bad" and then use that to minimize others' experiences.
However, the fact remains that many men do not experience the same incidents, however minor, or they think they're harmless.  So, without further ado, here is my list, or at least the parts that were noteworthy enough that I remember them.
#MeToo because of two flashers, one funny (age 13) and one scary (age 24 or so)
#MeToo because of random gropers, frotteurs, and wolfwhistlers
#MeToo  because a random guy in a car grabbed my ass when I was riding my bike in a lot of traffic, age 13 or 14
#MeToo because one of the older neighbor kids used to tickle torture me at age 3 or 4 and his dad laughed about it and never intervened (Serious question - do people tickle torture little boys, or is it mostly little girls because we're socialized not to attack and bite someone if they do something like that?)
#MeToo because in my freshman dorm one of the guys entered the womens' bathroom to borrow soap one time when I was showering and then looked into the shower to see who was in there
#MeToo because I had to share an office with a creeper for a few months until I asked my boss for an office transfer.  (Side note - I did not tell my boss he was a creeper, and instead emphasized that he was impacting my productivity by talking on the phone all the time.  Bonus points for my boss for realizing the guy was a creeper and pulling some strings to let me move ASAP, and negative points for the creeper's boss for knowing he was a creeper and putting him in my office anyway, despite the fact that there were only a few women at the company at the time.)
#MeToo because a few creepy guys tried to get my to get in their cars and go for a ride with them when I was out running in high school.  I was 14 at the time.
#MeToo because the lab asshole during my postdoc kept putting bikini babe screensavers up on the lab's computers and then threw a hissy fit when we finally got fed up and replaced it with some good old fashioned beefcake pictures

As an extra aside, a quadruple kick in the nuts to all the guys who harassed 13-14 year old me, since that was the majority of my "stranger danger" harassment.  Kudos to my mom for telling me that creepers are out there and that many of them target young teens since young teens are less experienced in avoiding them or shutting them down.  Double kudos to her for never saying anything about what I wore or doing any victim blaming.  (Sadly, she has since become judgemental in her old age)

* Seriously, fuck you, Mayim Bialek, for your editorial in the New York Times and for starring in the Big Bang Theory, which trivializes/humorizes a lot of creepy nerd behavior.  You didn't have to deal with the "casting couch" because you were fortunate and also because you took a hiatus from the film industry while you were in your late teens and 20's.  It has nothing to do with how you look. 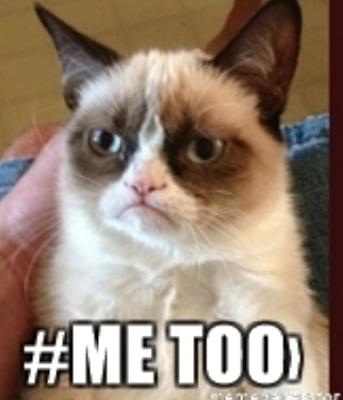