As promised, here's my take on the Caltech astrophysics sexual harassment case, aka textgate.  In the months that this post has sat in my to-be-edited box, more has happened.
Read the Buzzfeed article for background.  For the TL:DR version, a Caltech astrophysics professor, Christian Ott, texted/IM'ed one of his first year grad students ("A") a lot, mostly about random things or trying to guilt-trip her into working more, then fired her without giving a reason.  He also wrote a whole bunch of bad poetry about her on his Tumblr page, which has since been removed from the web.  He then started texting/IM'ing another one of his students ("B"), partly about random things, partly guilt-tripping her about needing to work more,  but also discussing how he had fallen in love with A.  B eventually couldn't take it anymore and switched groups and filed a complaint with Caltech's Title IX office.  Caltech contacted A, who had no clue that the fact that Ott had fired her because he was obsessed with her.  A and B both joined the suit, and Prof. Ott got put on a leave of absence for 9 months.
Meanwhile, it sounded like Ott was a horrendous advisor to everyone, and a total of nine people had left his group since 2012.  Only two had graduated.  One was fired for keeping his bike in the office.  For comparison, in the group of 15 or so people that I am a member of, since 2010: 16 students have graduated with PhD's, one left with a master's since his fiance got a job in Delaware, seven postdocs have finished and gotten jobs, and two sabbatical visitors and more than 10 undergrads have spent time in the lab.  One first year student was asked to leave, and one visiting grad student had personal issues and left after a few weeks.  In the group where I was a graduate student, three graduate students decided to leave grad school in the 4 years I was there (out of maybe 30 people that I overlapped with in 4 years).  In my postdoc group, no one left prematurely in the 2 1/2 years I was there.  So people do leave for various reasons, but it is usually a small percentage of the total people who spend time in the research group.  But apparently, this is not weird to the Caltech physics department and they gave Ott tenure two years ago.
Student A left Caltech and is finishing up her PhD elsewhere. Student B is in the process of finishing up at Caltech.  Yesterday she happened to tweet some anecdotes about what has been going on since the buzzfeed article. The tweets have been deleted, but I read them at the time and B has been facing subtle and not so subtle ostracization, with several leadership roles taken from her and given to other, less senior students.  It was disappointing to read, but she did not say actually say anything about Prof. Ott (who is on leave), just about her experiences since January.  This elicited sympathetic responses and retweets from most people but Prof. Ott decided to weigh in with some threatening tweets to her (also now deleted, but saved as screenshots)  WTF?  You'd think that common sense, plus the probation order not to have any contact with graduate students, would be enough to make him keep quiet on Twitter, not get in a Twitter war with B and her supporters, many of whom are senior female scientists who have rallied around her.
This is one of the oddest stories of gender harassment that I have heard, which is why I'm writing about it.  In fact, it's probably the oddest grad school related story I've heard, and that's saying a lot.  It's not a 'he said, she said' type of grey area situation.  The students had produced loads of text messages, poems, etc, and the former group members had been interviewed.  I can't even imagine how someone in their mid-30's, who'd been doing research for 15+ years and had been advising grad students for several years at that point, could think it even remotely ok to text first years about personal stuff.  This is not rocket science, people, or even astrophysics.  It's common sense.   Did he not even look around over all that time and see how other faculty members interact with graduate students?  Even though I was in industry for many years, I was only a few years older than Prof. Ott when I started mentoring students, and it would not have crossed my mind to text them about anything not lab-related.  Yes, I do consider some of them to be friends, and all of them to be valued coworkers.  From time to time some of them confide in me or get my advice about personal matters, and I do keep in touch with them after they leave.  But it has never seemed difficult to figure out where the line of professionalism is drawn.  Likewise, did the other faculty in the physics department not think it was the least bit weird that most people switched out of Ott's group?  (I'm assuming that the students began to warn each other once the mass exodus started to occur)  It's rarely a secret which faculty are assholes to their students.  To quote all my millennial students, I can't even... 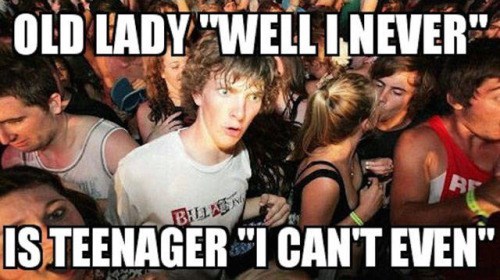