All I want for my birthday is a snow day, or at least a few inches of snow.* The latter may happen, although the former seems unlikely given the mild fall we've had this year.
As was the case with Thanksgiving, this is the first one in a few years that I can relax, work-wise. It's a good feeling. Last year I was coming off the NSF proposal/equipment installation and was still completely fried. The year before there was the looming layoff AND an interview on my birthday. Two years ago we had a first set of layoffs at my former company.

*I lied. For my birthday, I'd also like to know WTF is up with cowdude. This should not have to be something that needs to be a birthday wish, however. Two weeks ago he stopped answering my emails and calls. In a text message on Thanksgiving, he'd said he'd had a really rough two weeks. That is all I know. I hadn't done anything out of the ordinary. I know that there were some ugly politics going on at his work, and when things get stressful I know he needs lots of space and doesn't like to talk about it, so I've been keeping my distance. I'd assumed that if things weren't working and he wanted out, he'd let me know, but I think I may have been wrong. I'm not as in touch with my inner honey badger as I should be, so I'm biding my time and stewing and assuming that we have broken up, rather than being proactive on it. 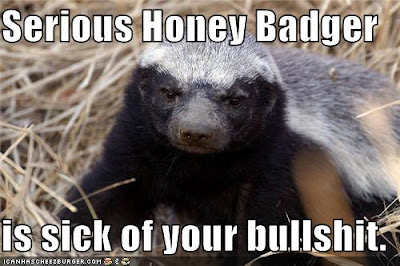